British clarinettist Matthew Scott graduated with a 1st Class honours degree from the Royal Academy of Music in 2013, followed by an MA with Distinction and DipRAM in 2015. He was awarded a Full Scholarship for the duration of the Undergraduate course and was generously supported by The Countess of Munster Musical Trust and The Greenbank Scholarship in his Postgraduate studies.

Matthew  works  with duo partners Daniel King Smith and Christine Zerafa He is a former  Selected Artist as Matthew Scott and Friends for Making Music also former Artist for both Making Music’s Philip and Dorothy Green Award for Young Concert Artists and The Countess of Munster Musical Trust Recital Scheme. Matthew was a 2016/17 Park Lane Group Young Artist with duo partner Christine Zerafa, they made their Wigmore Hall debut in January 2019. He was Wind Finalist in the Royal Overseas League 63rd Annual Music Competition, 34th and 35th Bromsgrove International Young Musicians Competition’s and won Wind Category 1st Prize in the 2014 Tunbridge Wells International Young Concert Artists Competition. Matthew made his St. Martin-in-the-Fields solo recital debut in January 2015, followed by October 2015, and May 2018. He regularly performs solo and chamber recitals for music societies and festivals throughout the UK.

Matthew is founding member of Ensemble Mirage, a dynamic flexi-ensemble based in London, UK. Originally called Trio Mirage (Cl/Vln/Pn), the ensemble won the Harold Craxton Prize and a Chamber Music Fellowship at the Royal Academy of Music for 2015-16, before evolving into the current flexi-ensemble; enabling the exploration and programming of the whole range of Clarinet-String-Piano chamber music. Ensemble Mirage have since performed at Music Festivals and venues around the UK including the Two Moors Festival, The Lantern Colston Hall, Norfolk and Norwich Festival, Oxford Chamber Music Society and many more. Other collaborations include the Delmege and Fitzroy Quartets, contemporary ensemble Khymerikal and contemporary collective NonClassical.  Ensemble Mirage were delighted to be 2016/17 St. John’s Smith Square Young Artists. 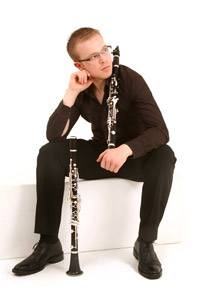 Having played principal positions in many of the Royal Academy orchestras and ensembles on the whole range of clarinets (Bb/A/C/Eb/Alto/Basset Horn/Bass and Contrabass) he has worked under many of the world’s most celebrated conductors. He has performed in Royal Academy of Music Opera productions of Mozart Die Zauberflote under Jane Glover and Strauss Ariadne auf Naxos under Elgar Howarth. He has also worked with singers at the Aberystwyth MusicFest including a recital performance of Schubert Shepherd on the Rock.

Prior to Music College, Matthew studied with David Campbell privately for 2 years. He was awarded Distinction in the ABRSM Performance Diploma in 2009. He was a member of the multi award winning Bromley Youth Music Trust, making 5 summer tours to Europe, including performance at the WMC Kerkrade in 2005 and 2009. Matthew returned as soloist with Bromley Youth Chamber Orchestra playing Finzi’s Five Bagatelles on tour in Bromley and across Hungary in summer 2010. He made his concerto debut in June 2009 playing Weber’s Clarinet Concerto No.2 with Bromley Youth Symphony Orchestra and was invited back to play the Mozart Clarinet Concerto in April 2012 with a specially formed orchestra of ex BYMT members in a concert in memory of his early teacher Derek Wallace. He was the Norman Trotman Competition 1st Prize winner in 2007 at BYMT.

In 2002 Matthew was diagnosed with Autism Spectrum Disorder and OCD. This has brought up many additional challenges along the way but Matthew believes that this does not need to be a bar to achieving a successful career in music. He is grateful to many people who have helped him reach where he is today.

In 2018 Matthew became a founder member of Bournemouth Symphony Orchestra’s new initiative led by disabled musicians, BSO Resound. They won the PRS Impact Award in 2019.  Matthew is keen to promote awareness of High-Functioning Autism in the music industry through the activities of the ensemble; particularly in the orchestral sector. Also in 2019, Matthew joined the Paraorchestra and Friends, travelling to Moscow in February 2020